I feel like I owe you some updates. Funny how I’ve only been blogging since late October and it’s already become an all consuming compulsion. Why can’t I feel that way about say… NOT EATING CARBS?! Sadly one does not often get the chance to choose one’s neurosis.
Like I mentioned on Monday I was in NYC over the weekend to celebrate #2’s 10th birthday. We had a great time and I managed to learn a few things too. Like one should never attempt to lug a two ton suitcase on the subway. Silly me, I thought that that whole pesky Americans with Disabilities Act would apply to NYC public transit. Nope! So I ended up schlepping that luggage along with bags full of shopping loot (bags being a term I use loosely, more like flimsy tissue that rips when you look at it, posing as a bag) up and down lord knows how many steps to and from subway stations. I have to say though that considering that a 6 block cab ride can run you near $8 the $2 one pays for a round trip ride from Brooklyn to Manhattan is a deal. Why was I in Brooklyn? No I’ve not lost my marble (you noticed I did use a plural there). My in-laws live near Coney Island in Brooklyn (always an amusement) so instead of paying a whopping $65 A DAY to the hotel for parking my car in the city I go to Brooklyn. To end this transportation information portion of the update I’ll just say that a bicycle cab ride of 4 blocks will set you back $25, and Akhmed your tip was included in that. Thanks to your rather cheeky reminder to me to “no forget tip now big lady. Driving you was harder for mees”… NICE PAL!
The celebrity viewing is great in the city, better than the last time I was in LA.. just lookie here 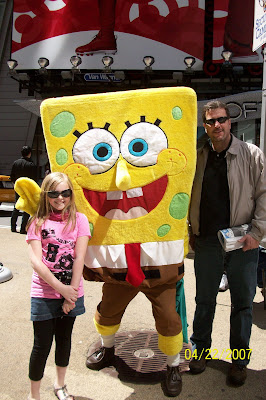 And not to be out done, Momma got her man too! 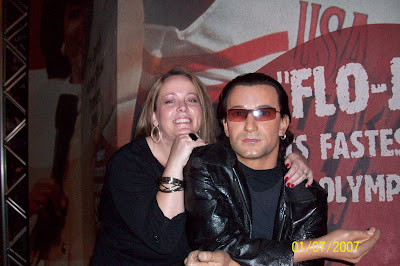 Okay, Okay so mine was made out of wax but I’m tellin’ ya I’ve seen U2 6 times in 2 countries and this Bono was nearly as real as the real thing (even better than the real thing… oh wait I’m not singing am I? sorry).

I also found myself very conflicted at one point. I found the BEST deal in all of Manhattan on a great nearly 4 star dinner… $26 per person for three courses, dessert and drinks. But, it was at the American Girl Cafe in the American Girl store, which is not only filled with scary looking (like come alive while you’re sleeping and kill you scary) $100 dolls but very very over indulged children. So I naturally wondered if maybe I was doing that. So I opted for a big tip to the wait staff and a stuffed dog in a purse ($40) and left the twilight zone dollies behind with the platinum amex card set and hopefully gained back some of my mommy cred in the process. I do have to say though that the food was GREAT and they had talk boxes on the tables with questions to get conversations started and that was a BLAST! Here is my American girl at her dinner in the city.. 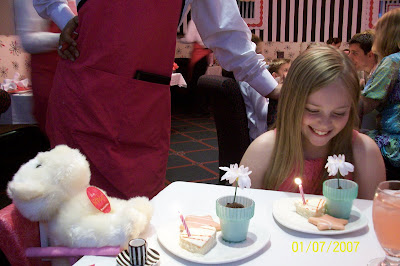 I spent the weekend oblivious to the swine flu, which is a good thing as I’m a MAJOR hypochondriac and I’d have never sat next to that nice Mexican man with a cough and practiced my Spanish on the subway ride back to Brooklyn, where we managed to get LOST! Have you seen Madagascar, the first one (the good one), where they are on the subway and Melman says to the others after a PA announcement “Did he say Grand Central Station or my Aunt’s constipation?” … well after about 10 stops in the 18 between Time Square and our stop in Brooklyn, I could finally decipher the PA announcement telling us that all the D trains were running on the N lines that day… oh by the way there is NO MAP FOR THE N LINE IN THE D TRAIN! So I had no idea where we were and being under ground most of the time I couldn’t call my hubby and find out if we were headed to Queens to become the next missing suburbanites in the city!! Panic, me… nev.. OF COURSE I PANICKED!! My country roots (much like my dark ones) began to show… get me OUT of this tin can I want to go home where we only worry about snipers on the Beltway and the next true story line to be written for The Wire (based in Baltimore, were we are so much safer.. jah). When I finally reached the DH by phone, and after they went full Brooklyn Italian on me (arguing about where the train would go and what stop would be closer, in language so vivid you could almost see their arms flailing)… We figured out that we’d end up in Coney Island and the DH could just drive down there and get us. Or as my MIL suggested we could walk the mile or so to their house. After all she has done that several times. And really who would notice the blond woman and child with a large suitcase, several bags that where breaking open and the look of shear terror on their faces? Heck the goombas in the sorted “steak” houses, “social” clubs and auto body shops between my in-law’s house and the subway station would likely just figure I had a body in the bag. I’d only have to cut across a small section of the park that my husband found a dead junky in when he was a kid, no big. Needless to say he drove down and got us and the worst that happened was I got stuck in the turnstile with the big old body bag!

Ah the city that never sleeps! Who’s up for an all Nuggetiers weekend?!

It must be said that waiting for me when I got home, was not only two very ticked of kitties but a GREAT box of loot from Sassy Pants Wifey (http://sassypantswifey.blogspot.com/)… it TOTALLY paid off to whine and complain about not getting the loot I won during the SITS Spring Fling… her guilt was my good fortune. I won a set of Spa products, but GOT that, plus tons of samples, jewelry, cute clippies for the girls and a card to top it all off. I think I’ll run down to the Maryland Lotto office and pitch a fit there, see what it gets me, no?

Thanks for missing me gang, I missed you too! I want to let ya know that the Mail4Kids giveaway has been extended due to my absence. Today #3 got his starter kit, WOW! I’m gonna post about that tomorrow. I know some more of you wanted a chance to enter so make sure you do.