Yes that is his full name. He is 7 years old. Weighs 20 pounds. Growls when the door bell rings. Snores worse than The DH (and that guy is in the running for Grand Poobah of Log Sawing!). Oh and he is a CAT, but don’t tell him that.

Today I come you, my bloggy buddies, The Nuggetiers, men and women wise and knowing for your opinion.

You see, Don Sonny Corleone DiPaola, or Sonny as we call him, has picked up a new personality.. um.. quirk. How do I put this? Well see, he pisses on people. Yep, he’ll just mosey up to you and drop a load of wet, warm, smelly yellow lub all over your foot. At first I thought it had something to do with the person.

The first time it happened was when my brother-in-law was visiting. He has 213 cats (and a wife, sorry girls he’s taken). Actually it’s only 2 but it was funnier the other way. He was the first victim and I thought maybe it was because he had cats. The next victim though totally blew that theory. He nailed #4 in her open toed sandals. I was in the loo myself when she came banging on the door. Not an uncommon thing in this house.. why is it that my kids have a 6th sense that compels them to NEED to know exactly what I’m doing in the powder room? GEESH!

# 4: “Mommy, Mommy, Sonny pee on me, on my pretty shoes”
Me: “WHAT! No he didn’t. Now leave me alone I need some privacy”
#4: “Yes he do! Need towel Mommy. Give me wipies”
Resigning myself to yet another accompanied visit to the girls room I open the door to see she was indeed right!
#4: “Toll you! Go put Sonny on time out!”

She is the bane of Sonny’s existence. She sits on him, pulls his tail, hugs (code for chokes) him and that guy just takes it. He’s never laid a claw on her, despite copious urging from her siblings. So I thought, well maybe it was revenge peeing.. sort of Coppola-esque “Fredo, I know it was you”..whizzzzz. But Friday he dropped trowel on The Amazing Jessica as she was dropping Baby off before heading TO WORK! GASP!! and WHAT THE HELL SONNY?!!!! I mean really cat, now we can’t even have visitors because you’ll pee on them!

Me: “Welcome to our home. Can I offer you a drink or maybe an extra pair of socks now that the cat has welcomed you as well?”

So it isn’t a health issue, we checked that out. He is fixed so it’s not a macho thing (and I think he may have been born gay anyway but that’s another post). Maybe he has a literacy issue. After all we do often say peeps around here and maybe he sort of took the “pee” part literally. I don’t know. What I do know is we have got to do SOMETHING and that’s where you come in. Here is what our Sonny looks like chillin’ on the rug (on which he does not pee!) 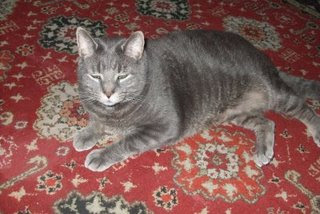 and being forced to show his spare tire(s), a 20 pound cat is bound to have some body image issues 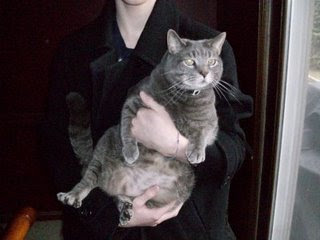 And now do your part. I’ve added a poll on the right side bar. Vote for what you think best suits his style
Is it ravishing red randy kitty from the big city? 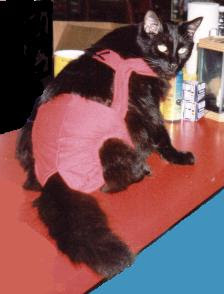 Or maybe Cat’s Ahoy Navy Blue? I for one love the little red bow on this one. Nice touch or too Metro sexual?

Or do you think he should just get the hell out of the closet already and dive into this hot little diva number? I have always been a fan of the pink and gray look. 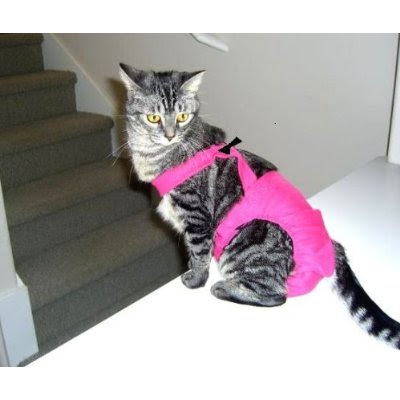 No folks these are NOT kitty lederhosen. They are in fact cat diapers!! Go figure, huh? And get this, they have been voted best product by Cat Fancy magazine (visions of Best In Show, anybody?). And since I snagged their pics and maybe they blog stalk like MapQuest (read here for details) and MAYBE that will get me a discount, these fashionable feline butt covers are brought to you by Joybies. Thanks for your input on ways to curtail my cat’s output.