Is it just me or was I REALLY a big ball of cranky pooh last Monday? I’m writing this post on Sunday night so it remains to be seen if I’ll win the Monday scrimmage for my sanity tomorrow. I won’t be going into battle unarmed this time though. No I STILL don’t have a coffee pot!! Truth be told I’m sort of holding out for Keurig to come through for me. Cheap? Maybe, but I prefer to think of it as blogishly optimistic. So what will this secret weapon for The Vanquisher of Monday be? VIA la Starbucks… nope that’s not a typo (JOY!).. Starbucks has a new product called VIA. It’s handy, portable, easy to make liquid life in a foil wrapper! The kind people at Starbucks, either feeling my Monday woes or concerned for the safety of the cats in this house, sent me some free to try out and tell you all about! True to form I was most impressed with the accessory they sent, yes I’m distracted by shiny objects! Check out this bad boy!! 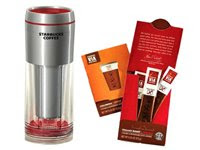 Yep it’s a cup BUT not just any old cup Nuggetiers..it’s a super-mega-carry-your-own-coffee-with-you-bullet-of-blingie-BOOYAH cup!
Via is actually and instant coffee, just add hot water and go. Which works well when you feel that, “give me caffeine or the cat gets it” moment coming on. It comes in those cool sticks you see above and you can lock and load em into that cup! Coffee to the rescue no matter where you are (I hear the cats out on the deck cheering for Starbucks).
Now though Via was tasty and did the job it’s not exactly a Venti double shot skinny mocha with no whip. I’ll still have to go in for the real deal there. But for a fix on the fly it’s great. Guess what though it’s also SUPER AMAZING in brownies! mmmmm brownies! Don’t believe me? Try it yourself!! I have two three packs of Starbucks VIA one Colombian and one Italian Roast up for grabs today. Wanna win? Here is how to do it. Leave me a comment telling me what YOU hate most about Monday. Make it good too, no easy outs like “I hate going back to work”.. well DUH don’t we all? Be specific, say something like “I hate going back to work because the guy in the cube next to me marinates in Old Spice and hums Sexy Back all freaking day long!”. The two most creative haters win! I get to pick, so there! You can get an extra entry for tweeting, well because I’ve got a mean twitter addiction brewing (HA I said brewing in a coffee post!) and I obsess over seeing my handle every 30 seconds!
(sticks her tongue out) So THERE Monday, I’m coming for ya and this time it’s gonna be epic!

contest open through 10/19/09 winner will be announced 10/22/09.
ALSO OPEN TO ALL NUGGETIERS BOTH FOREIGN AND DOMESTIC, OLD AND SOGGY, NEW AND CRISPY!