Has the that inner stylist in your head ever coerced in you into buying those TRE CHIC new shoes that called your name from that store window, thus forcing you to take them home and love them forever? WHAT it can’t be just ME hearing voices that tell me to shop. I KNOW you are just as crazy as I am hear it too! And has that same psychosis ever compelled you to say… buy an outfit JUST for those shoes? It’s kind of like the old horse before the cart thing. BUT they were on sale, red patent leather, 4 inch stunners just waiting for YOU to come along, right?!

Well I’m sort of feeling that way these days about baby gear. There are several problems with THIS horse-before-the-cart scenario. Not the least of which is that you can’t put a baby in a suede bag, lovingly tuck it into a box and store it on a shelf until open toed season rolls back around. There is the whole raising it until it turns 18, putting it through college, popping for it’s first sofa, footing the bill for it’s wedding all so it can come over for the holidays, drink too much spiked egg nog and tell you that you were the (say it with me gang) WORST MOM EVER!

THAT said though have you seen some of the stuff out there these days? I mean they have a breast pump that weighs less than a pound. Where I had to lug the DDs over to the local dairy and get hooked up to one of those four pronged vacuum thingies you see Bessy sporting.. NICE visual there huh? 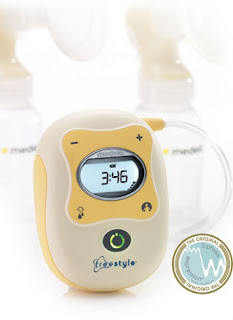 AND had THIS highchair been available when ANY of my kids were small, MAYBE I could have avoided strapping my kids into that big-blue-fish-laden-toy-covered-flashing-light-bejeweled monstrosity that hogged up my whole kitchen for YEARS on end! 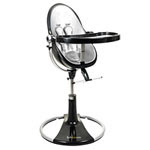 Turns out Parents Connect from Nickelodeon is hosting the World’s Largest On-line Baby Shower and I’m tellin’ ya the loot they are GIVING AWAY is almost cool enough to make me want to pop out my 5th kid!

I was thinking.. maybe I could adopt a Cabbage Patch Kid and carry it around in one of those strap on sling things they are giving away. You wouldn’t have me say, involuntarily committed for that or anything would ya? Okay so maybe the better idea is to win it and give it to a friend, relative or even a local Children’s Hospital. Because there is NO way I’m missing out on the fun just because all my kids are big enough to have smelly feet now. How does that happen anyway? I mean they go from having heavenly tootises that smell like Angel farts to sporting the human equivalent of rotting cabbage stank between their toes!

So here is the 411 on the PARTAY from my lovely Bloggy Buddy and fellow Spartan, Jessica McFadden, author of A Parent in Silver Spring, 2009 Nickelodeon Parent’s Pick blog award winner, writer of the Washington Times A Parent In America (now THEMS some serious props eh?)

The online party will be hosted by The Shower Diva Susan Newton, the guru of baby and bridal showers.

2) Head over to Pingg, RSVP “Yes!” and then use the “Share Invite” feature to invite everyone you know! The person with the most guests wins a $650 stroller!
RSVP here: http://parentsconnect.pingg.com/babyshower

3) Come to parentsconnect.com on December 16th anytime between 10am – 8pm ET for all the fun stuff about baby showers – the gifts! the games! and like Jesscia says… without any of the suck!
Visit: http://www.parentsconnect.com/connect/boards/bootcamp/baby_shower/chat_it_up.jhtml

I’ll see ya there, I’ll be the one in the corner spouting obnoxious comments sage advice about the insanity joy of parenting four kids from teens to tween to toddlers. (just kidding more than likely I’ll be quietly hanging out near the punch bowl, have pity on me and say “hey”)

NOTE: I don’t have to disclose a darn thing because this post is just an invite to the fun, I didn’t get anything, I wasn’t paid, nobody slipped a mickey in my java.. so TAKE THAT FTC! Oh um I mean, just in case you were wondering you nice g-men at the the FTC.