The sun is high in the cloudless clear blue sky, beating down mercilessly. Turning 360 degrees, the same monotonous ocher of the desert burns your eyes through the shimmering heat haze. You try to wet your cracked lips but your tongue has cemented itself to the roof of your mouth. You know you should be sweating but the moisture in your skin evaporates before it has time to pool into the droplets you expect, leaving only a white salt crust residue and an incessant itch all over your body. Your bones ache, your head pounds.

Water!
You swing the rucksack from your shoulder and delve deep into the recess. Retrieving the canteen within you claw at the lid frantically and manage to prise it open to a hiss of protest. Raising the vessel quickly to your mouth you instantly anticipate the refreshment of the cold liquid coursing through your whole being and gulp greedily. Hope turns to wretched despair as you gag involuntarily and feel the rage within escape in a primeval howl as you throw the canteen further than any NFL quarterback.
Hot Water!
Despair. You sink to your knees in the baking sand. Hands and face stretched skyward you seek deliverance through dry tears.
You detect a low thrum breaking the silence. Louder and louder. You shield your eyes from the incessant glare reflecting all around and a shape begins to emerge from the distance. Closer and closer, louder and louder until…no! what the….a spaceship?? As you clear your vision with the back of shaking hands a strange vaguely humanoid being descends and walks forward to stand in front of you. Verging on hysteria you take in the hairless round head, pallid skin and odd shaped legs partially covered by… is that a skirt? The being kneels down and opens it’s mouth as if to communicate, but all you hear is a thick, garbled unintelligible sound which vaguely resembles human speech. Seeming to understand that it’s attempt at dialogue has failed the humanoid unhooks a strange brightly colored object from it’s belt and offers it to you with an insistent thrust of it’s arm. Hesitantly you take the object and the being motions to you as if drinking from a bottle. You look down at the object and realize that it is some form of futuristic drinking system. You raise it tentatively to your lips and as the liquid pours from the vessel you gasp!!
Ice Cold Water!
The being smiles and nods wisely and waves a farewell as it ascends to the spacecraft hovering above.  Your gaze follows it gratefully as the thrumming noise begins again louder and louder and as the craft prepares to move off as the humanoid descends into the bowels, was that? no, surely not but as the noise gets louder and louder you swear that you caught a glimpse of a bare buttock and a ….Your eyes open and you hit the sounder on the clock alarm.
Spaceship, Skirted Man, Futuristic Cold Drink Dispenser, Prince Albert?? What a WEIRD dream!!
Or was it? 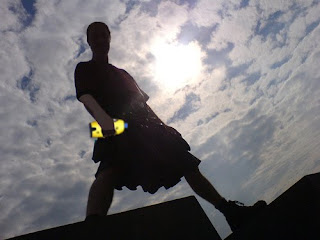 How cheesy was that? who wants a copy of my first novel? No? You surprise me!
When Lara asked me to write something for MANuary I immediately started to write about our product as we have done very little but eat sleep and drink it for the past 5 nearly 6 years. I then had a rethink. The good folks of Lara’s Land will find out all about it soon enough, most likely through these very pages. Lara has taken us under her wing and we are happy to be snuggled up there. And I, the proud mother hen, am ready to kick you out of the nest and onto world domination!
So. Who wants to run a business nowadays? Here’s how it works for us our side of the pond.

You WHAT?? Want to borrow money from US? A BANK? Are you SURE???
Well, what’s it for? A new business? NO TRACK RECORD? You’re having a LAUGH!!
OK!OK! You can stump up half the money. We may be able  to help. Give us your house and we’ll consider it.
OH! and you’ll also need a triple A credit rating.
We know that technically speaking “WE” were bankrupt and you the tax payer kindly bailed us out, but hey! Them’s the breaks!!

Well that’s the world we all live in now and the sooner we realize it the better. I’d venture to say the only difference on our side of the pond is that the banker has this little conversation with you from his yacht anchored off the coast of the Cayman Islands where he is, no doubt, enjoying his bonus. Remember that? You know the one “necessary to retain the top talent” … If I’m not mistaken that would be the same “talented” group of savants that got us into this mess, no?
Who am I? Stephen Bradley. Occasionally skirted man. MD Ice Cool Industries, Developers of the Quiver. 41, 1 wife, 3 kids. And always good for a laugh or a good brain workout trying to decipher his language.
New Guiding Principal in Business….“Fuck them, we’ll do it ourselves” <—-Sounds MUCH better than “Necessity is the mother of invention” and likely gets MORE done as well!


P.S. Please excuse the odd formatting of this post. Blogger hates me once again. We’ve got this passionate love-hate (knock it off or I’m switching to WordPress) thing going.