Every now and then life reveals little truths to us. How we come upon them varies as much as their impact on us. After all, the truth that eating doughnuts makes you fat is far less of an revelation than the realization that you can’t your mistakes shape you – in the case of those doughnuts, quite literally. The most recent of truth I’ve stumbled upon came in the form of a book.

In all honesty it’s really more a work of performance art than reading material.  At points I found myself angered, annoyed and repulsed by the autobiographical tale of a man who seemed so self involved as to be loathsome. Yet turn the page, an the humanity of the story makes even the most repellent aspects somehow relateable.

In the end I walked away from this book, a tale of life it’s truths and imperfection, uncertainty and pain, with a sense of hope derived from the raw honesty of actor, cancer survivor, author, husband, father and human being Evan Handler 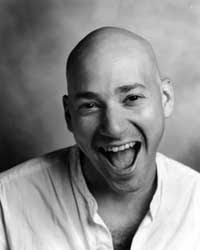 The following interview with Evan covers his books, career, parenthood and more. I encourage you to consider reading the book. 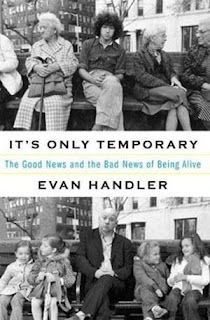 It’s not a traditional, bad guy is bad, finds good girl, realizes he’s bad and we all live happily ever after tale. It’s brutal, honest, funny and moving. I have two copies to give away. This isn’t going to be a kitschy blog giveaway game (that comes next month in FABruary!) so you don’t have to jump through any hoops. Just read the interview, promise not to laugh that I got the title of my favorite show EVER wrong and that Evan calls me on it, and leave a comment. Tweet about it if you feel moved to do so (you can find Evan on twitter as well @EvanHandler). I’ll give you “credit” for a tweet just mention me in it too (@dipaolamomma). I’ll announce the winners some time in the next two weeks. ENJOY

How do you feel about critics? Case in point, Publisher’s Weekly said of Time on Fire “Laced with anger, punctuated by humor and fueled by his indomitable will to survive, Handler’s story is entertaining, harrowing and ennobling” Then went on to say of this latest book (It’s Only Temporary: The Good News and the Bad News of Being Alive) “Unfortunately, his egotism often robs him of perspective”. For the record I think the “egotism” lends the book it’s unabashed honesty and a perspective so unique as to make it endearing.
Well, it’s difficult to respond to critics without sounding defensive, or merely unattractive. Obviously, I tend to create a piece the way I think it works best, meaning the way I feel it communicates most precisely what I’d like to say. And I like to think I have a fairly decent ability to assess my own work’s strengths and shortcomings. So, I find the reviewers who get and appreciate those efforts to be more intelligent and insightful than the ones who don’t. That said, the New York theater community is full of first-person observations of critics sleeping through performances they then publish opinions about, so I’m not sure these things are as closely examined as many readers imagine.
My main complaint with coverage of IOT is that it was so widely ignored. It didn’t receive a single full-length print review, anywhere, after my first book was positively reviewed in virtually every major market newspaper, and many national magazines. I actually expected very harsh responses to some of the material (termination of a possibly “miraculous” pregnancy!). Instead, it just wasn’t paid attention to at all. One theory of mine is that most editors of newspapers and magazines depend on the brief mini-reviews in Publisher’s Weekly and Kirkus to decide what to cover, and what to ignore. My first book got starred reviews in each, and got coverage everywhere. My second got panned by each, and didn’t get a word written about it anywhere else. If that system is in place, it’s a shame. It would mean there’s an awful lot of good material getting overlooked, due to two individuals not liking it on their one quick read.
I also think I probably erred in positioning the material myself. In every interview I emphasized how it’s a collection of stories about relationships, similar to those in Sex and the City and Californication (my Hank Moody life), and all about growing up, since I thought that’s what people would relate to. I didn’t talk about it as a book that’s quite explicitly about long-term survivorship, and what it’s like to walk around with a solid case of post traumatic stress disorder, since it deals with those issues through storytelling (often about relationships), not intellectualized study. But I do wonder whether press response might have been stronger if I’d handed them a more unique, albeit more obscure, angle than love and relationships.
Owing to the fact that a good portion of my readers, myself included, are huge Sex in the City fans, most only “know” you as Harry Goldenblatt. Tell us about some of the other parts you’ve played and would liked to be remembered for.
(It’s Sex and the City, not Sex in the City. Don’t worry, you’re not alone.)
I’m proud of various things, from my portrayal of Shrug, in the ABC sit-com “It’s Like, You Know…,” to my portrayal of Larry Fine in the ABC film “The Three Stooges,” to guest parts on “West Wing,” and “Lost.” There’s a lot of theater work I did back prior to 1991 or so that I was very enthusiastic about, but the nature of theater work is that it evaporates upon presentation. The original cast of “Six Degrees of Separation” at Lincoln Center Theater was a pretty special group and time. David Eigenberg of Sex and the City was in that cast with me. And anyone who liked Sex and the City ought to at least look at “Californication.”

Has becoming a father changed you creatively? If so are we going to see you kick John Lithgow of his, Kid’s Book writing throne or what? (for the record I’m big Lithgow fan)

Becoming a father has made me tired. Now that my daughter has started preschool, becoming a father has made me chronically ill. I haven’t taken an uncongested breath since before Thanksgiving.
And I think John Lithgow would be difficult to push off any throne. He’s extremely tall, and appears to be fairly sturdy.
One thing I want my readers to know about you is that you still speak out about patients rights and health care issues. Do you have anything you’d like to add to that?
I kind of like to mouth off about anything people will listen to me spout about, so I have to be a bit careful. When I think I’ve got something to say that needs to be said, I often say it at Huffingtonpost.com.