*****ALERT******WARNING******ADVISORY******
The Governing Offices of the
Panel for Insanity Suspected
Sarcastic Yeahyoos
Of Ubiquitous Rhetoric
a subdivision of  the
Surely Ewe Laugh Foundation
(also known as GOPISSYOURSELF)
Has issued the following statement:

DiPaola Momma, after having been snowed in, in her home since late Friday afternoon is beginning to lose her already tenuous grip on her sanity. The cooking for and cleaning up after a family of six, none of whom seem capable of doing either of the above stated things for themselves, has created conditions considered a danger to her mental state. Please consider sending in the Saint Bearnard’s, fully stocked. She prefers Spanish olives, pit in. Thank you for your attention. We now offer you a giveaway in exchange for your time and attention. 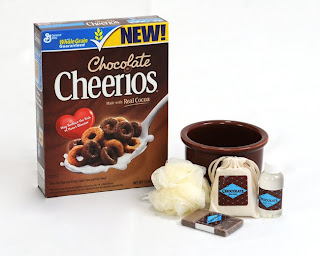 Hello Nuggetiers. Ignore the first half of this post i got my hooch I’m doing just fine. In fact SO fine that the kiddos and I played Suzie Homemaker and company today. A while back (yes I’m lazy and should have done this post MUCH sooner) our friends and General Mills and My Blog Spark sent me along a box of the New Chocolate Cheerios to try. Being the total cheapskate chocoholic I am I was stoked to give them a try. I’ve got to say the kiddos dug them much more than I did. For me the tasted a bit too much like Coco Puffs. I’m not a big fan but if that is your thing.. DUDE these are PERFECT for YOU. With the heart health benefits you get with Cheerios and the yummy goodness of chocolate it’s a win, win for ya. That said we made marshmallow treats with these puppies and coconut marshmallows and OH DADDY thems was some good eatin’!

Now the gang from General Mills would like one of YOU to give them a try and guess what.. you’ll get a chocolate SPA DAY TOO! A lovely box will arrive on your doorstep with all the super cool fun you see in the picture above.Yep just leave me a comment about what you think of Chocolate Cheerios (if you’ve tried them) or what you might cook up using them as an ingredient. EXTRA entries for tweets or more than one recipe idea.

Here are the rules gang: EACH entry should have an email attached to it. If you win and I can’t find you EASILY then we move on to the next winner. Contest is open to U.S. residents only. Ends at Midnight Monday FABruary 15th (2/15/2010).

So get a’ commentin’ gang. And ignore all that “sanity” babel at the start of this post. I’m perfectly sane, at least that’s what Justin Timberlake told me over coffee this morning.

2 thoughts on “cuz I HEART you (giveaway)”