With Memorial Day right around the corner. A surefire sign is all the sale flyers clogging my mailbox and junking up my spam filters.  Everyone (myself included) is talking about holiday menus and impending summer fun. And while I’m looking forward to all of that as well, I thought I’d dust off this post again in hopes that we can all keep memory in our Memorial Day.

The bulk of this was written several years before my oldest son became a Marine – an event that forever changed what saying “my fellow veterans,” means to me.

Memorial Day is not Veterans day. Though the bulk of this post is about my experience as a veteran, I think it’s important that we make the distinction.  This isn’t a day to thank me for my service, it’s a day to honor those who died in service to this nation.

Think that just means stopping by crumbly old memorial in a historic park somewhere that marks the site of a battle? Think again. Yes we should honor all those who paid the ultimate price of freedom, but I challenge you to make it a point to honor those lost in recent history.  Those who never came back and those that came back only to lose the battle at home.

An average of 22 veterans take their own lives daily. DAILY! Yes, they are causalities of war. Heroes that fought for your freedom the same as any lost on foreign soil.

Enjoy your three-day weekend, grill up something tasty. While you’re at it stop by a local veterans memorial, buy that poppy from the Vet set up in front of the big box store. Ask them about their story, let them tell it. Listen with an open heart, hear what they don’t say. In the retelling they honor those who never came back. Keep the memory in Memorial Day.

Today is Veteran’s day and I always thought it was a bit awkward to say “Happy Veteran’s Day”. Not because I’m not happy to have served my country. I think it has something to do with knowing some of the hardships that come along with that service. I was a 19 year old kid when I left the familiar surroundings of my small town and boarded a plane for Navy basic training in Orlando, Florida. It was just after Thanksgiving 1990 and I couldn’t believe how cold it was in Florida, I thought this was supposed to be the sunshine state! I was scared out of my mind, lost and really regretting being the first person in my family to have joined the Navy.A few weeks into training our Company Commanders came into our compartment and removed all the drill weapons. They then announced that the Operation Desert Storm was underway. We were allowed one call home. With the sound of Bing Crosby singing “I’ll be home for Christmas” playing over the PA I called my parents. That was the first time it really hit me what it meant to be a member of the armed services. 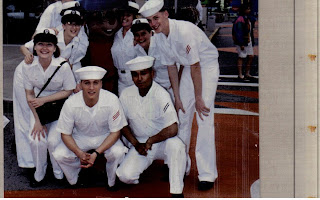 Yep that’s me on the right all snuggled up to Fifle the mouse from An American tale. I’d go on to cry every time I heard the theme song “Somewhere out there” while serving a continent away from my family and friends. Okay I STILL cry when I hear it.  To my right is the best buddy any sailor could ask for Michelle Graf! 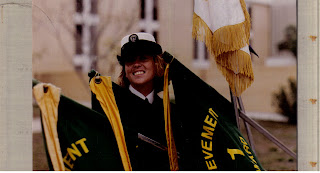 I went on to become a Navy Airman and made it to
my first duty station in Rota, Spain. Rota was a stop on the way to both Iraq and Somalia when I was there. Ships came through with Soldiers, Sailors, Marines and Air Force Airmen. I count myself privileged to have served, partied, jaw jacked, worked my butt off and mourned with many of them. 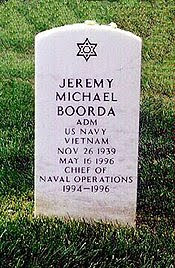 Among them all I was honored to serve under Admiral Jeremy Michael “Mike” Boorda. Admiral Boorda is to this day someone I admire beyond words. He worked his way up from the lowest of enlisted rank, Seaman, to go on and become an Admiral and Chief of Naval Operations. I was honored to have had a one-on-one conversation with him. When he reportedly took his own life a hole was ripped in my heart and memory. He was honest and honorable, a person who stood up for what he believed, championed the underdog and no matter what others may think they know, he was a true hero.

With so many currently serving and so many giving the ultimate sacrifice there are those who’s loss has faded in our collective memory. Yet they are heroes all the same and I have not forgotten them.

Remember you don’t have to support war to support a Veteran or honor the fallen.